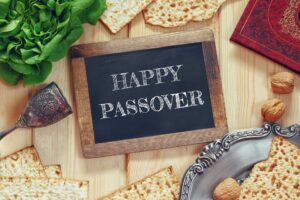 Passover, or Pesach in Hebrew, is one of the Jewish religion’s most sacred and widely observed holidays. Passover 2023 will be from sundown on April 5, 2023, to sundown on April 13, 2023. In Judaism, Passover commemorates the story of the Israelites’ departure from ancient Egypt, which appears in the Hebrew Bible’s books of Exodus, Numbers, and Deuteronomy, among other texts. Jews observe the weeklong festival with a number of important rituals, including a traditional Passover meal known as a seder, the removal of leavened products from their home, the substitution of matzo for bread, and the retelling of the exodus—the liberation of the people of Israel from slavery in Egypt in the 13th century b.c. On the first two nights of Passover, families and friends gather for a religious feast known as a seder for the Jewish holiday. No matter how you observe, we wish you a Happy Passover.