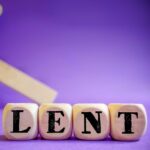 In western Christianity, including Roman Catholicism and Protestant denominations, Lent is the period prior to Easter.  It begins on Ash Wednesday, which is February 22 this year, and lasts for 40 days (not including Sundays) through April 6. Historically, the observation of Lent included fasting and penitence. Instead of fasting, today many people choose instead to “give up” something, such as a habit, food, or hobby that they enjoy enough that will be significantly missed throughout the period of Lent. What will you choose to give up?