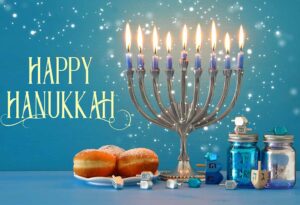 Hanukkah (also spelled Chanukah ) is an eight-day Jewish festival marking the miraculous victory of the Maccabees—Jewish freedom fighters—over the Seleucidian Greek occupiers in the year 139 BCE. After recapturing Jerusalem’s Holy Temple, which had been converted into a place of idol worship, they searched for pure oil with which to light the Temple menorah. They found just enough to burn for one day, but it burned for eight days until more oil could be brought. To commemorate this miraculous event, on each of the eight nights of Hanukkah, Jewish people light special menorahs (candelabras), adding another flame each night, until on the eighth night eight flames are burning brightly. The lighting takes place at home, in a doorway, or near a window, and is performed after brief blessings are recited. This is why Hanukkah is also called “The Festival of Lights.” Happy Hanukkah to all who observe.